End of the Spear 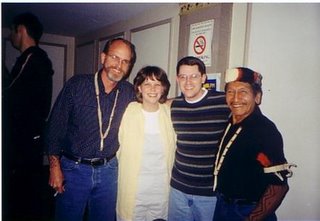 The year was 1956 and several young missionaries from the United States left their homes, their families and the comfortable lives they knew so that they could take the gospel to a people group in Ecuador untouched by modern civilization. The missionaries were willing to place their very lives in harms way in order to tell the Waodani people about the love of Christ. Little did they know that it wasn't their lives, but their deaths that God would use to reach the Waodani.

Their martyrdom has motivated and inspired generations of missionaries for over 50 years (including my wife and I). After the deaths of Nate Saint, Jim Elliot, Pete Fleming, Ed McCully, and Roger Youderian, the proclamation of the gospel continued among the Waodani. And their tribe was transformed by the love of God...

A new movie about this well-known story, End of the Spear, just hit the movie theaters this past weekend (and was one of the top ten grossing films in America). I was able to see a screening of this movie this summer along with a number of other Campus Crusade staff. The story of Jim & Elisabeth Elliot motivated me tremendously while I was a college student as I wrestled with yielding my whole life to Christ. Their example of being willing to place their relationship before God and their very lives before Him challenges me even still today.

Lori and I had the privilege a few years ago of meeting two individuals who played significant roles in this story -- Steve Saint, the son of one of the murdered missionaries and Mincaye, one of the murders who eventually became a Christian. This is a picture of us with them. Their story challenges me because it causes me to consider my own commitment to Christ and the sacrifices that I'm willing to make for His sake. For most of us in America, the worst that will happen to us as Christians is that we may get mocked, teased or threatened. But for many believers around the world (even today), their lives are very much on the line because of their profession of faith in Christ.

By living in the the most affluent country in the world, we can easily get tied to our "stuff" and hold tightly to things that will pass away. Our top priority can quietly become our own safety and comfort, instead of God's glory. To call Jesus "Lord" means that we have yielded are lives completely to Him -- willing to go anywhere and do anything that He may ask of us. The example of Nate, Jim, Roger, Pete and Ed is one that we should all consider and examine our own hearts as we offer our lives as a sacrifice to the one who gave His life for us (Romans 12:1-2).

If you are not familiar with the whole story of the Ecuadorian missionaries who gave their lives so that others could live, I encourage you to check out End of the Spear while it is in the theaters. We vote with our dollars at the box office so that Hollywood can see that Christians want to see quality made films that tell our stories. You can read a review of this movie here.
Posted by scottmcrocker at Monday, January 23, 2006

Email ThisBlogThis!Share to TwitterShare to FacebookShare to Pinterest
Labels: missions