I'm close to finishing the third book in a trilogy by one of my favorite authors, Randy Alcorn and I can't wait to read the last few chapters. The book is called Deception and continues the story told in Alcorn's previous books, Deadline and Dominion.

Deception follows the story of Ollie Chandler, a homicide detective fighting his own demons while seeking to solve a murder that leads him to unexpected places. I won't tell you much more about the book in case you want to read it, but I was introduced to a fun website while reading this fictional story.

In his quest to pinpoint a suspect in an unsolved murder, Ollie discovers the unique geographical trends that Americans possess when it comes to how we refer to soft drinks. Some of us call it pop, some call it soda and others refer to all soft drinks as "coke." Ollie visits the Pop vs. Soda website and learns something intriguing about the suspect he's investigating. 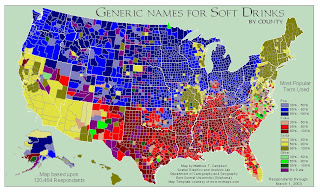 As a kid growing up in the Detroit-area, I learned that these tasty carbonated beverages were called "Pop." But while spending a summer in southern California while in college (my first extended exposure to those outside the midwest) I learned that some others thought it odd that I called it pop. Over the years I've traveled extensively throughout the U.S. and have lived in several different states and have learned firsthand that regional dialects do exist in the U.S.

This map shows the differences across the United States in reference to soft drinks. Since I've lived in different parts of the country where residents have referred to it as pop, soda or coke, I've gained the ability to adjust to my surroundings. Now that I've lived in central Florida for four years, I've begun to call it soda since some people make fun of me when I call it pop. Sometimes I even find myself asking for a "fountain drink."