God at Work Among Students in New Orleans 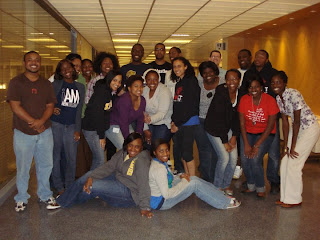 Although Hurricane Katrina devastated the city of New Orleans in the fall of 2005, there are a number of dedicated residents that are committed to helping rebuild the city. Among these individuals are a small group of Impact students at Xavier university that are passionate about reaching their campus and community for Christ.

Xavier University was founded in 1915 as a private Catholic school that would develop young African American leaders. Nearly a century later, although 1/3 of Xavier students are not black, the school consistently ranks among the top schools in the nation in placing African American graduates in medical schools across the country.

In the wake of Katrina, Xavier, like other schools in New Orleans, lost the majority of its students as they moved to other locations in order to continue their education as the city recovered. Now boasting an enrollment of nearly 4,000 students, the school is once again re-establishing itself as one of Louisiana's premier universities.

Since Xavier is a private Catholic institution, our Impact chapter is not recognized by the school as an official organization on campus. But that doesn’t stop the Impact students from sharing the gospel with their friends, mentoring younger leaders and serving in their community. I had the opportunity to travel to New Orleans earlier this month and serve as one of the presenters at an Impact Leadership Institute (ILI) that was hosted by the Xavier Impact chapter on the campus of Tulane University.

Having visited New Orleans a few times in the year following Katrina, I was encouraged to see how much it has been rebuilt and how the vibrancy of a unique place is returning. I was also inspired by our Xavier students as they hosted other Impact student leaders from Alabama, Florida, Oklahoma and Texas. The students focused on their relationship with God, learned about how to effectively serve as leaders on campus and in the community and did outreach on Tulane’s campus.

The ILI in New Orleans was just one of five ILI’s that were held throughout the nation this spring as over 150 Impact student leaders were equipped to lead movements on their campus this upcoming school year.
Posted by scottmcrocker at Monday, April 19, 2010