A Florida Gator Gets Kicked Out of School

Living in Central Florida is great in many ways but our interactions with nature and wildlife can make this an adventurous place to live. The prospect of hurricanes each summer and fall weighs heavily on each of us and you never know when you're going to step on a fire ant mound or come across an armadillo or a bear rummaging for food.

But one of the most dangerous things about living in Florida is the presence of alligators. You could encounter one in the most unlikely of places and always need to be especially careful when near lakes, ponds and rivers. Some kids at a middle school in Tampa learned this the hard way the other day.

A seven-foot gator somehow found its way into the school building as students were beginning their school day Monday morning. Here's a short CBS segment on the gator:

What was most remarkable was how the gator got inside the building. From AOL News:

"Preliminary reports suggested the gator somehow crawled inside the school during the weekend. But Gary Morse, a spokesman for the Florida Fish and Wildlife Conservation Commission says that, in reality, a custodian let the alligator inside early Monday morning.

"The alligator was found between the parking lot and the cafeteria, and the custodian let the gator inside," Morse said. "I understand his thought process -- he thought it would be easier to apprehend if it were in a contained area, but that just makes it worse.

"When an alligator is confined, it feels far more threatened. Ever try to get a dog out of a cage when it's unsure of its surroundings?"

Alligator sightings are not unusual in Florida, according to Hillsborough County School District spokesman Steve Hegarty.

"Florida has lots of gators," he said. "If you're a Floridian, you will run into one."

Fortunately, no children or teachers were hurt but they probably should have a little sit-down with the janitor and explain how to handle gators in the future.

A couple of years ago, an eleven-foot alligator found it's way from a small pond into the parking lot at the Campus Crusade for Christ headquarters. A trapper was called in and the gator had to be put down due to its aggressiveness. So next time you come down to visit Mickey Mouse just be careful near the water or you may run into something like this: 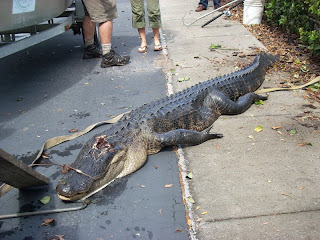 Posted by scottmcrocker at Wednesday, June 09, 2010