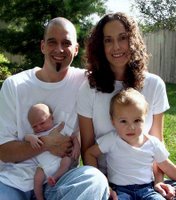 A friend of ours, Erik Steffen, went home to be with Jesus this weekend. Erik was a fellow staff member with Campus Crusade and we worked alongside of him during our time in Indianapolis. He had courageously been battling brain cancer for over a year and a half and the Lord finally decided to take him home. Erik leaves behind his wife, Kelly, and their two young boys, Alex and Jensen.

I, along with many others, had been praying for a miracle and that God would completely heal him. Erik had gotten been getting better until this spring when his health began to deteriorate. When things like this happen, I do wonder what God's plan is in this whole thing. Erik was a good person. He had faithfully followed Christ, served Jesus with his life and was involved in reaching people with the Gospel all over the world. And now his wife is a widow and his sons don't have a dad.

Lori and I have had too many friends and family members pass away over the past couple of years. I've honestly lost track of how many people we care about that have died. The reality is, though, that those that know Jesus do not die without hope. Erik now understands this much better than we do as he is complete and whole and doesn't have to fight anymore. Though he was ready to meet Jesus, he didn't want to go yet. He was only 35 years old. He wanted to grow old with Kelly. He wanted to see Alex and Jensen grow up. He wanted to lead more people to Christ.

But in God's sovereign plan, Erik is now home. I think of what the great evangelist D.L. Moody once said to a friend,

"Someday you will read in the papers that D. L. Moody of Northfield is dead. Don't you believe it. At that moment I shall be more alive than I am now. I shall have gone higher, that is all - out of this old clay tenement into a house that is immortal, a body that sin cannot touch, that sin cannot taint, a body fashioned into His glorious body. I was born in the flesh in 1837; I was born of the Spirit in 1856. That which is born of the flesh may die; that which is born of the Spirit will live forever."

Erik is now home, but Kelly and Alex and Jensen and the rest of his friends and families are left to cope with the reality of his passing. Erik touched many lives during his time on earth. Just read the guestbook entries on their website. Would you join with me in praying for Kelly and the boys as they grieve and mourn Erik's death? And let's not forget to celebrate a life well lived. Just as it was true of the Apostle Paul, it can be said of Erik Steffen:

"I have fought the good fight, I have finished the race, I have kept the faith. Now there is in store for me the crown of righteousness, which the Lord, the righteous Judge, will award to me on that day—and not only to me, but also to all who have longed for his appearing." ~ II Timothy 4:7,8

Scott- so sorry to hear about the loss of your friend. His family and friends (you & Lori, included) will be in our prayers. Those of you on staff with Crusade touch so many lives, it's amazing that you will all reunite in Heaven some day. It doesn't take away the pain or the questions, but sure gives a sense of peace.