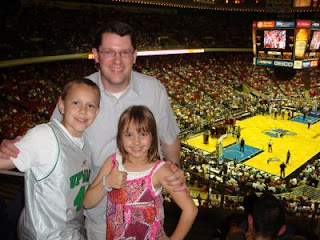 Lori and I were able to have a fun time last night along with a couple of our kids at the Orlando Magic vs. the Toronto Raptors game last night. Thanks to the Orlando public school system, Brennan and Leah received free tickets for their good grades this year. Of course, Lori and I had to pay for ours (nothing is completely free in the land of Mickey Mouse.)

It was a good game and we had a great time with the kids. But the best time of the night came at halftime. Earlier in the game, they had selected a random fan to try to make a half-court short in order to win $100,000. Halftime rolled around and the announcer informed us that the guy was going to be blindfolded during his shot attempt.

He also told us that the whole arena was going to act as if the man made the shot so that we could play an April Fool's Day joke on him. So dude comes out and gets blindfolded. He heaves up a pathetic shot and the whole place erupts. The mascots start jumping on him, music blaring, lights are flashing and he's told that he made the shot. Once it sinks in, the guy starts running around the floor celebrating like crazy.

The announcer asks him what he'll do with the 100 grand and he says that he was just laid off from his job so this is all great. They then give him one of those fake, over sized checks (made out for $100,000) and have him turn it around. On the back, it says "April Fools." The guy looks dumbfounded, embarrassed and somewhat angry. The announcer explains that his girlfriend, who is there, set him up and this is all in good fun. They then had him a 100 Grand candy bar and send him on his way.

A great April Fool's Day joke, huh? Albeit cruel, but funny, right? Well, it appears the joke was on us. According to Orlando Sentinel sports writer, David Whitley, the guy was actually an actor and the only people who got fooled were those of us in the stands. I felt bad for the guy so finding that out was a great topping to a great evening.
Posted by scottmcrocker at Thursday, April 02, 2009