Is Kobe Better Than Jordan? 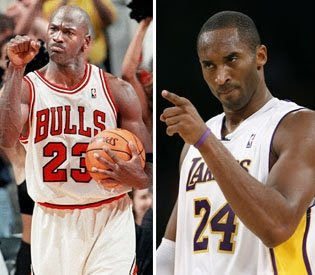 I first wrote this post a couple of years ago after the Lakers triumphed over the Magic in the NBA finals and, with another championship added to his resume, the debate over whether Kobe Bryant is a better player than Michael Jordan has intensified.

The comparisons make sense since there are a lot of similarities between the two. They were shooting guards that played the same style of game and were both prolific scorers. Both played in Phil Jackson's triangle offense for the bulk of their careers and won multiple championships.

But in order to examine the two we'll need to look at some of the relevant facts of what they were able to do in their careers. Anytime we compare players from the same sport, especially from different eras, it's important to not only look at their statistical numbers but also how they compared to their peers during their playing career. Although Kobe's playing days are far from over, he and Jordan have played a comparable number of games.

Let's look at how Kobe and Jordan compare when it comes to individual accomplishments, awards and team success. The numbers below are based on the completion of the 2010-2011 season.
Although it is obvious that Kobe Bryant is a tremendous basketball player and will be considered one of the best to ever play the game, the level that Michael Jordan excelled is yet to be matched. From nearly every conceivable angle Jordan was simply better than Kobe. Jordan performed at a level of excellence that had never been seen and has yet to be seen again. Perhaps if Kobe has a few more MVP seasons then this argument will be stronger, but, for now, Jordan is the superior player.
Posted by scottmcrocker at Friday, July 01, 2011

Good article. I'd love to see shooting percentage in there. While I was younger during the Jordan Era I don't know too many people who throw up more shots than Kobe. He makes many of them, but he gets a lot of practice.

yea lets talk percentages where jordan shot 37 shots to score 55 and kobe around 29 and maybe 30 putting up 61. In the new york game where jordan scores 55 he went on a stretch of missing 9 for 10 shots and put up 18 shots in the 4th quarter alone. Kobe on the other hand scores his 61 right along with Gasols 31.. Kobe simply does what is needed for hs team to win... Hands down Kobe is the best he could have shattered these numbers the man scored 81 so what makes you think he couldnt easily average over 30..... #1 Jordan didnt have nearly as much as comp as Kobe and yet he still dominates. Think about how many people were as athletic and strond as jordan then NOBODY...And how about today. Just about everybody is over 7 foot how many were back then???? How many d. wades, d. howards, josh smiths, daron williams, kobes, lamar odoms were there then. My point is there were not as much out there that there is now so my question is what if Kobe came first. Just ask your self what can Jordan do that Kobe cant? Kobe out scored the mavs himself 61/62 by the end of the third and sat outt the 4th and you seriously think he couldnt average 30...Come on now no contest the man got his 3 rings way quicker than jordan lead his team WITH shaq,,,,The young kobe carried the lakers putting up numbers like 49 12 boars and 9 assits, thats why i hate when people say LBJ is just young when Kobe did it so way try and powder it up......KOBE=G.O.A.T