42% Of Asian Americans Identify As Christians 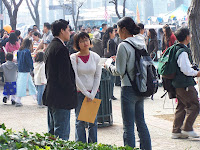 
"The first comprehensive look at the religious lives of the nation's 18.2 million Asian Americans finds most are devoted to their faith traditions — but many are disconnected from any affiliation.

Asian Americans are "the fastest-growing race group, and they are bringing with them a diversity of faiths," says Cary Funk, senior researcher for Pew Forum on Religion & Public Life, which released the report today.

The survey of 3,511 adults, conducted in English and seven Asian languages, was large enough to establish data about the six largest groups: Chinese, Filipino, Indian, Vietnamese, Korean and Japanese.

•The greatest overall number (42%) are Christians, chiefly Protestant or Roman Catholic. Fourteen percent are Buddhist, and 10% are Hindu. Twenty-six percent are unaffiliated.

•National origin makes a difference. Korean Americans may be politically conservative because 40% are evangelical Protestants. They come from a nation that holds many of the world's largest Protestant churches. Hindu Americans may be among the nation's wealthiest and most educated because about half of them come from India, the nation favored for special U.S. visas for scientists, engineers and other skilled workers.

To read the rest of the article please click here.
Posted by scottmcrocker at Thursday, July 19, 2012