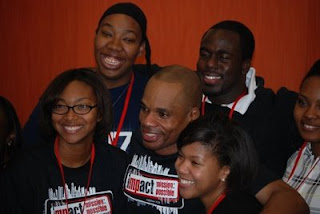 The Impact Movement, the ministry which I help to give leadership to, recently held our ninth national conference in Atlanta, Georgia. As always, God chose to show up in remarkable ways as 1,400 students, marketplace professionals, pastors and missionaries were called to a deeper commitment to Jesus and to become more heavily involved in the mission of Impact. Here are some highlights:

The Speakers
We have been fortunate over the years to see how God has used our conferences and campus chapters to produce a number of leaders from within the black community that have now become fruitful leaders in churches, missions and music. Impact 2008 was blessed to see some great main session speakers. Here were a few:

Musical Artists
We were blessed this year to have two of the most well-known artists within the gospel and Christian hip-hop communities -- Kirk Franklin and Lecrae.

- Kirk Franklin. I've had the opportunity to see a lot of my favorite singers in concert but have never been able to see Kirk Franklin before Impact 2008. He did not disappoint. His set was great and I particularly enjoyed the fact that he did a number of his older tunes. It was also neat to see how impressed he was with our conferees. He stated that he could only recall seeing young people of color respond with the type of enthusiasm and genuine worship that he saw at our conference once or twice before. We look forward to partnering together with him in the future.

-Lecrae. There is a growing movement within the Christian hip-hop community of rappers that possess tremendous skill on the microphone and do so with biblical and theological fluency. Lecrae is one of this movement's most prominent representatives. Not only did he perform in concert, but he did a sit-down question and answer session with my good friend, Rasool Berry, during one of our main meetings. Most people may not know this, but Lecrae actually became a Christian at the Impact 1998 conference. I was thoroughly impressed with his biblical knowledge, missiology, and belief that hip-hop music can be used to influence youth for Jesus.

Day of Outreach
One of the highlights of our conference is our Day of Outreach. We take an afternoon of the conference to go into the Atlanta community and share the love of Jesus in word and deed. Along with some students from the University of Missouri and Carnegie Mellon University, I walked to a nearby park to interact with some homeless people that stay in that area. And thanks to the generosity of Chick-Fil-A and Here's Life Inner City, we were able to provide food and care kits to the individuals we spoke with. The men we spent time with were generally very grateful for our visits with them and we were able to have some deep discussions about eternity.

I was particularly impressed with Craig, a man not that much younger than myself, that is in between jobs and supports himself by doing spoken word and written poetry. Not knowing who we were when we met him, he shared a moving poem that indicated he was a Christian. Even in a life marked by abuse, injustice and poverty, he is not angry or bitter. He is seeking to use the gifts that God has given Him and turn his negative experiences into positives.

The Volunteers
To the outsider, The Impact Movement may appear to be bigger than we actually are. We have less than 60 full-time staff and are dependant upon volunteers and partners in ministry to pull our national conference off. At each conference I am in awe how individuals will take vacation time off of work, will pay to be there and work 12+ hour days for a week straight so that our conference can happen. God has used Impact in the lives of thousands of people to change them for the better and one way that people thank Him is by serving at the conference. Thanks to all of our volunteers -- you are a joy to work with!

The Students
For almost 13 years, I have given my life to the mission of reaching college students with the gospel of Christ. I enjoy working with college students because they possess the zeal of youth and the maturity of impending adulthood. I especially enjoy working with students of African descent because so many of them are true survivors. They battle a society that stereotypes them and, in many ways, looks down upon and judges them. But they move forward in faith and strength and make a difference in the world. In fact, if you look back on the past century, any movement of significant change was initiated by college students. You need not look any further than a couple months ago when college students helped elect a black man the first president of the United States.

I was so proud of our students and how they responded to the challenges placed before them at this conference. More so than ever before, we called them to become specifically engaged in the work of The Impact Movement. When we let them know about the current financial crisis that our ministry is facing, many of them responded in a tangible way by committing to give to our work on a monthly basis. The reality is that God doesn't need our money. He will accomplish His purposes whether we give or not. But He does invite us to join Him in His work.

And when we invited our conferees to do just that, I couldn't help but be moved to tears. So many of our students had to trust God in big ways just to raise the money to get to the conference and to see so many of them come forward with their financial commitment demonstrated a sincere attitude of surrender to their Lord.

In addition, we invited the conferees to make further commitments, like praying regularly for our ministry, sharing their faith, going a missions trip, starting a chapter or begin tutoring a child. On the last night of the conference, we had the students send a text message, which was then rolled on the screen in the ballroom, to indicate how they would get involved in the mission of Impact. As scores of messages came through with how they would make a difference in their world, I couldn't help but think that I have never been prouder of the students I serve.

I don't think God is through with us yet. If you'd like to learn how you can get more involved with The Impact Movement or give a financial gift to help us in our work, click here.

Posted by scottmcrocker at Friday, January 02, 2009