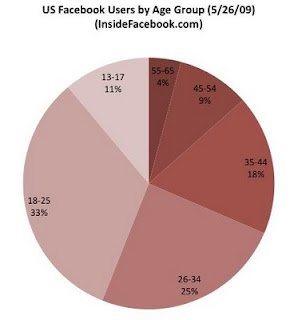 Over the past few months, baby boomers joined the popular social networking site in droves, creating some inter-generational tensions in the process. From February and March, though, to April and May, that trend seems to have reversed. According to data that Facebook supplies to its advertisers, the 55-to-65-year-old age group's activity has drastically declined over the past couple months (by 651,080, to be exact), making it the only demographic to experience an overall drop in numbers.

While their parents seem to be fleeing Facebook, 18-to-25-year olds are spending more time on the site than ever. Since the end of March, nearly 2 million new members have joined up in that age bracket. The root of these developing Facebook trends? We'd bet that those Gen Y-ers, finding themselves unemployed and out of school, are aiming to waste some time and distract themselves. Meanwhile, we'd guess that their parents, in light of their companies' tightening belts, are laying off the during-office-hours browsing."

Posted by scottmcrocker at Wednesday, May 27, 2009