In Honor of My Parents on Their 40th Anniversary

My parents’ journey in life together started innocently enough well over 50 years ago. Having grown up mere blocks from each other in the same small Michigan town located on the banks of Lake Huron, they first met as young children. My father often found himself playing at my mom’s house since he was good friends with one of her brothers and later on he found himself coached my mom’s dad on various youth baseball teams.

Initially, my mom and dad didn’t care much for each other but that began to change during adolescence and their interest in one another increased as they entered into adulthood. Coming of age during the turbulent decade of the 1960’s, my father enlisted in the United States Marine Corps while my mom, who is two years my dad’s junior, entered community college upon finishing high school.

They wrote to each other regularly while my dad was in Vietnam and saw each other the few times he was able to make it home. Over time they realized that 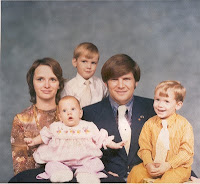 they had fallen in love. Months after my dad finished his time of active service in the military, my parents were married in May of 1970 and officially began their life together. Less than a year later, my brother, Chip was born. I came along in 1973 and my sister joined our family in 1975.

Life seemed good as they began preparing for the years ahead as a family. But for reasons known only to God, the road ahead would not be an easy one. An unspeakable tragedy struck our family in February of 1976 when my brother, who had contracted some type of viral infection, unexpectedly stopped breathing on that fateful Valentine’s Day evening. They rushed him to the hospital and my father, who was working the midnight shift at a brass factory at the time, hurried to the hospital. By the time my dad got there my brother was gone.

Having been married for less than six years, my parents’ worst fears had been realized. They had lost a child. Having to cope with that reality while also raising two other young children was not easy. As would be expected, they struggled and managed the best they knew how. What is important is that they stuck together. As is often the case when a couple loses a child, the grief becomes so overwhelming that the marriage crumbles to the point of becoming irreparable. But God had his gracious hand on the Crocker family and my parents’ marriage survived.

They raised my sister and me in a loving and supportive environment and modeled a God-honoring marriage. They cared for us, provided for us and perhaps, knowing that we could be taken from them at any moment, had a greater appreciation of the blessed gift that children are. They provided a spiritual foundation that no doubt has contributed to what I am doing with my life today. I can say with a fair degree of certainty that had my parents given up on their marriage that I would likely not be where I am today.

They demonstrated the grace of God to me in a way that helps me to relate to my heavenly Father as a caring, nurturing father. I have seen that even as my parents have walked through death and loss (and they have lost a lot of loved ones), that their faith in God has remained strong and that He is at the center of their marriage.
In my ministry to college students, I have met scores of students who have to deal with the after-effects of broken homes, poor parenting and messed up childhoods. Even though I was introduced to death at a young age, I grew up in a stable, safe and loving home environment. In my thirty-seven years I have had the privilege of being close to a number of tremendous people who are great influencers in the world. But none have my admiration, respect and love like my parents.

Thank you, Mom and Dad, for your faithfulness to God, to one another and to our family. Thank you for being such great grandparents to our kids. And thank you for being a living demonstration that God can take the suffering of our lives and turn it into His good. Congratulations on 40 years of marriage and I pray that you will have many more together. I love you dearly.
Posted by scottmcrocker at Saturday, May 08, 2010

I just sent them anniversary wishes, but didn't realize it is their 40th. Great tribute, Scott!!! They have been influential in many people's lives, including mine. I appreciate your mom's friendship and encouragement through the last 10 years.

I know the feeling is mutual - that they are proud of their kids, too.

Yep - you made me cry.
There are no words for how wonderful our parents are.

What great words of tribute to your mom and dad! I hope they are having a very happy anniversary!
Leanne