A Cartoon, a Chimp and a Controversy 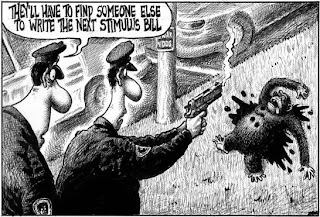 You have probably heard or read about the controversy surrounding a recent editorial cartoon published in the New York Post in which a dead chimpanzee was interpreted as having been compared to President Barack Obama. It is common for political cartoonists to try to tie seemingly unrelated current events into a humorous image. In this case the subjects were the passage of the recent stimulus bill and the death of a well-known chimp.

I like what Edward Gilbreath has to say about it:

"The debate over whether the cartoon was just boneheaded insensitivity or blatant racism is something that will continue as long as there’s such a thing as mono cultural editorial teams (wasn’t there anyone in that NY Post newsroom to raise a caution flag?) and monophonic civil rights activists (Al Sharpton leads the charge again). But as a journalist, one of the most interesting aspects of the controversy for me is the ethical questions it raises for the media and other communication leaders.

From my perspective, the question should be: Will we use these incidents to start constructive conversations about race, culture, and understanding (the kind I believe Attorney General Eric Holder was attempting to get at yesterday), or will we use them as justification for our hostility and as vehicles for our continued separation?"

country. But we can do it in a civil manner without resorting to outdated and racist stereotypical images. Unfortunately, this is not the first time that this type of thing has happened with President Obama nor is it the first time a president has gotten compared to a simian (see at left). But because of the racial baggage that comes with it, I would hope that political junkies could think of something more original when they wish to disagree with the president. President Obama should not get treated with kid gloves because he's African American. But neither should his race be used a backhanded slight from those that still think black people belong in the back of the bus.
Posted by scottmcrocker at Thursday, February 19, 2009

Thanks for this post. There has been a lot of interesting commentary about this.

I think the point the cartoon was trying to make was valid - there are a lot of questions and disputes with the stimulus bill. However, the usage of a monkey congers up too many negative emotions - whether the monkey was to represent congress or Obama is not clear, and the ambiguity in that further elevated the responses to this cartoon.

For me, I struggle with both those lambasting the cartoonist and belittling the implications of the cartoon. The NY post has said that there was no ill-intent. We have to take them and the artist at face value, we cannot assume that he was intentionally being racist.

But we also have to realize that cartoons like this deeply pain individuals and let go of some of our biases. If something is printed or said that deeply offends a group of people, it is the responsibility of all to defend their brothers and/pr sisters. As a Christian I find this deeply important.

I think back to the Jyllands-Posten's printing of an image of Muhammad. That was deeply offensive to many Muslims around the globe. It seemed to be wasting air when commentators attempted to asses the intent of the drawings. The matter of fact was that good or bad intentions, this offended may Muslim and perhaps perpetuated further issues in Islamic relations.