Return of the Prodigal 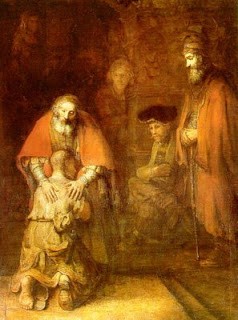 The lesson in our adult Sunday school class this morning at our church was on a familiar story, the account of the Prodigal Son as told in Luke 15. You have probably heard of the parable of a son who asks for his inheritance, leaves home and squanders it away, returns home and is lovingly embraced by his father. Perhaps better than any other biblical story, the account of the prodigal son demonstrates the unconditional love of God.

Several years ago I was blessed by a multi-week sermon series by Pastor Joey Johnson on Luke 15 at the church I attended at the time, The House of the Lord in Akron, Ohio. Pastor Joey unpacked these verses in ways that I had never heard before and much of what I learned from that series has stuck with me to this day.

In our class this morning we compared the well-known Christian version of the story with a similar parable found in Buddhism. One of our pastors, Dave Abney, led us in a discussion comparing and contrasting the two stories. You can read both accounts and a comparison here. Since most of our class had never read the Buddhist story before it was interesting to become familar with it.

While there are many similarities between these two parables, there are a number of striking differences. The biggest difference is that in the Buddhist version the son has to prove his worth through turmoil and striving. Even after finally being accepted by his father and given his inheritance, the son had lost years of relational intimacy with his father.

On the other hand, the Christian version demonstrates the uniquely Christian concept of grace (or undeserved favor.) The son in the Luke 15 account had insulted his father and family, had wasted everything that was given to him and deserved to be punished. But, in grace, his father runs to meet him when he returns home and treats him as royalty. The son's older brother, who had dutifully served his father for years, was displeased with his father's display of grace toward his brother.

As our class talked about this story, many of us, unfortunately, identified with the older brother in the story. We'll gladly accept what our father wants to give us, but resent his generosity to others that don't deserve it as much as we do (or so we think.) We don't celebrate the lost prodigals that have come home because we're more concerned with getting what we want. Thankfully, our heavenly Father demonstrates the same kind of grace to older brothers as he does to the prodigals.
Posted by scottmcrocker at Sunday, November 30, 2008